All Collections
AI Time Tracking in Timely
Under the hood: How AI works in Timely

Under the hood: How AI works in Timely

Written by Lisa
Updated over a week ago

“AI” is an umbrella term with quite a few different meanings, depending on who you ask. For some, it sounds like the coolest thing ever; for others, it signals the end of humanity. Here at Memory, we use the term to refer to a specific branch of AI called “Machine Learning”. In this article, we’ll break down exactly what that means and how it allows Timely to intelligently draft time entries for you.

First things first, let’s define the form of AI we use for Timely. “Machine Learning” (ML) is a set of methods and practices that aim to solve problems for which solutions are either a priori unknown or unachievable. It’s not about telling the AI to use a known process — it’s about getting it to work one out for you.

Even within ML, there are lots of different ways to do this, but we use the branch called “supervised learning”. You can use supervised learning when you know the inputs and outputs of a system (the data), but can't efficiently conceive the transformation(s) which get you from A to B.

With a ton of time data and the ability to show the model what project each piece belongs to, Timely provides an ideal problem for ML to solve. As a user, you just need to:

In doing so, you create a relationship (a “pair”) between each memory and your projects, as follows:

To code that relationship, you could hire an army of human analysts to study such pairings all day and perhaps they would be able to pick an appropriate project when presented with a new memory to log… But that would be really expensive, inefficient and a massive violation of your privacy, so instead you can just use ML to do it!

ML paradigms can be organized along many dimensions. In Timely, the unidirectional relationship between a memory and a project is modeled with a classifier. Classification makes up a large number of ML applications, but there are many other forms of ML too — including unsupervised learning, reinforcement learning and generative modeling. 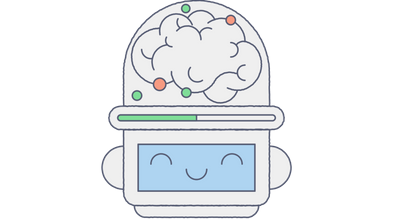 Are you smarter than ML?

Ok, ok — it sounds quite involved, but how smart exactly are these classifications? Many people are skeptical of ML performance, believing it to be inferior to human intelligence. While AI is perhaps not as smart as humans, it can still be extremely powerful.

Still not convinced? Then take a look at the following classification examples; can you beat the machine by finding the relationship for each problem? (Answers are at the end of this article 😉 ).

A model contains ordered mathematical operations to apply to an input. The result of the last operation is the output of the model. In Timely, a model takes the features extracted from a memory and outputs the project to which it likely belongs. (Skip to “Walkthrough” below to learn how Timely does this).

Since a model contains mathematical operations and mathematics works with numbers, there can be a mismatch between the composition of a memory and what a model can accept. This is often because your work memories contain attributes made up of characters and timestamps. To get around this, your work memories (inputs) go through a feature extraction process that converts the raw data into data points or sets of numbers. Each extracted component of a data point is called a feature, and each data point is made of a set of features. We use “data”, “data points” and “features” interchangeably throughout the rest of this article, since they are all acceptable inputs to an ML model.

Just like raw input data and features, raw output data needs to be converted from its original form into numbers. The converted set of numbers is called a label.

In the brain, excited neurons transmit tiny amounts of electric current to other linked neurons, and the cascading stimuli forms a chain which we recognize as creating memories or triggering muscle movements. Neuronal connections are constantly changing with sensory stimulation and experience. Science, currently, can't fully explain the “hows” and “whys” of the working brain, as it’s difficult to observe what happens when brains are given inputs.

Why are we telling you all this? Because this human neurological structure has directly influenced neural networks used in classification. Neural networks in supervised learning are essentially a highly versatile type of model inspired by the structure of the human brain. They leverage two properties of the brain:

The intensity of the electric currents propagated through the brain are values in a neural network that can be measured in terminal neurons. The weight of the connections between neurons can be altered; zero-weights are equivalent to the absence of connection.

Now you’re completely clued up on ML’s classification algorithms at a high level, let’s take a look at how Memory AI puts these to use on a daily basis.

In case you’re interested in the technical ins and outs of that whole process, here’s roughly what it looks like, end to end: 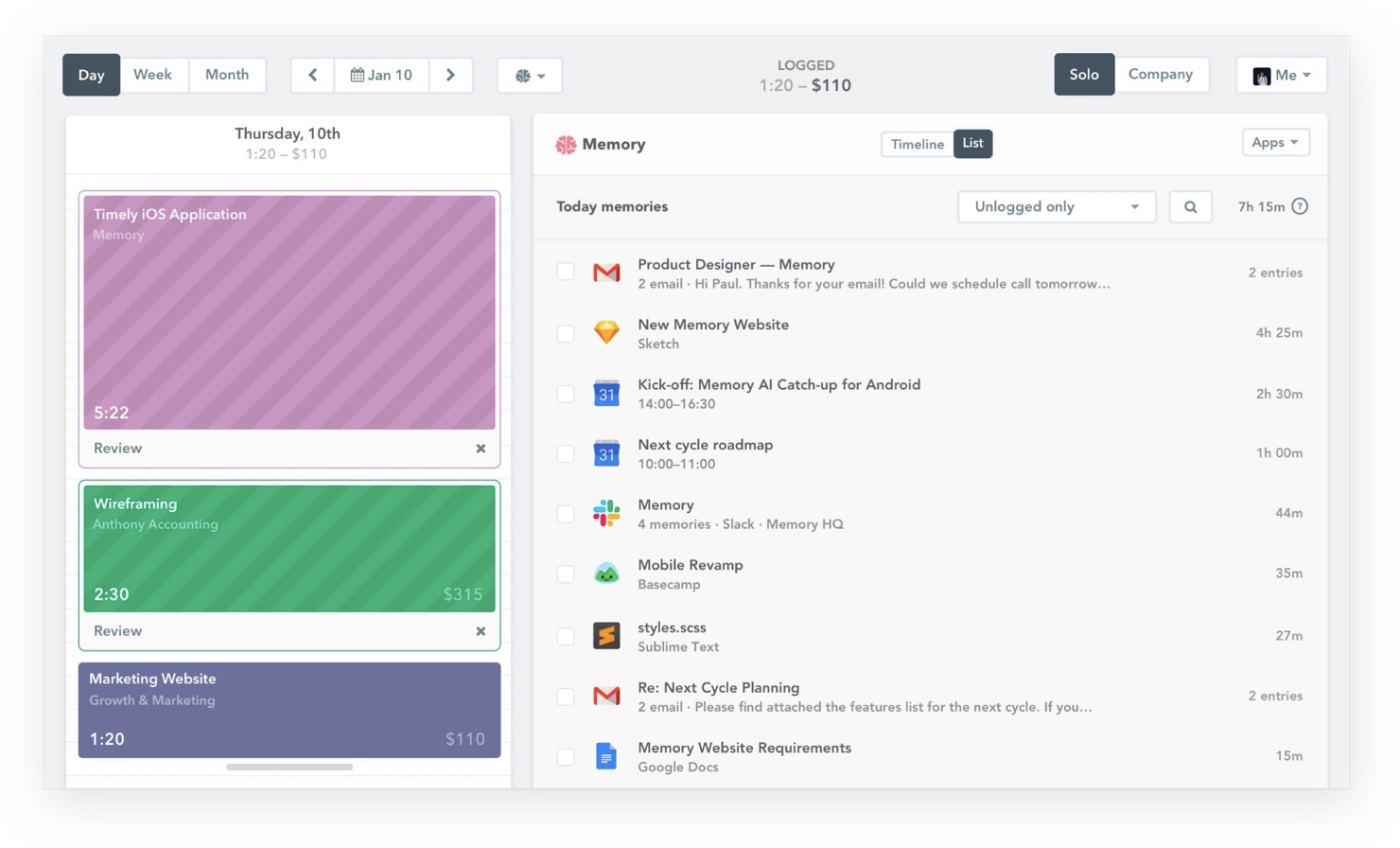 Once training is finished, Memory AI moves on to its next task: inference. The inference phase is like a truncated version of the training phase. It has only two steps, and it assumes that a model has been previously trained. Here’s what it involves: 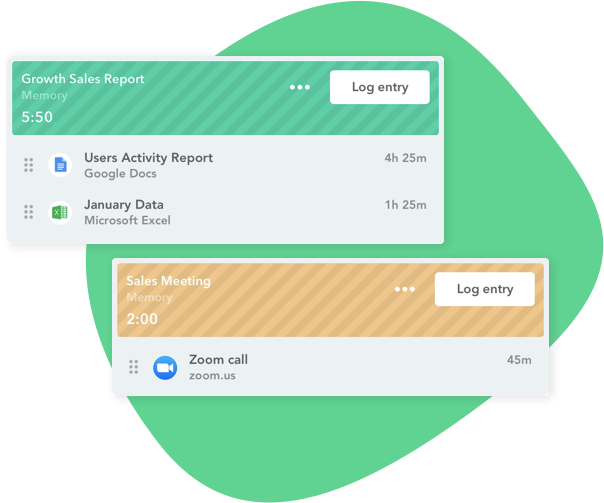 At this point, Memory AI has a collection of memories, predicted associated projects, and is reasonably confident in its predictions. That said, we want to make sure you, the user, have the final say about how things are grouped before that time is logged.

As such, Memory AI groups memories according to their project predictions — providing the confidence is high enough — to create a draft time entry. You can either leave your draft as it is or amend it before hitting “Approve” to make it official. 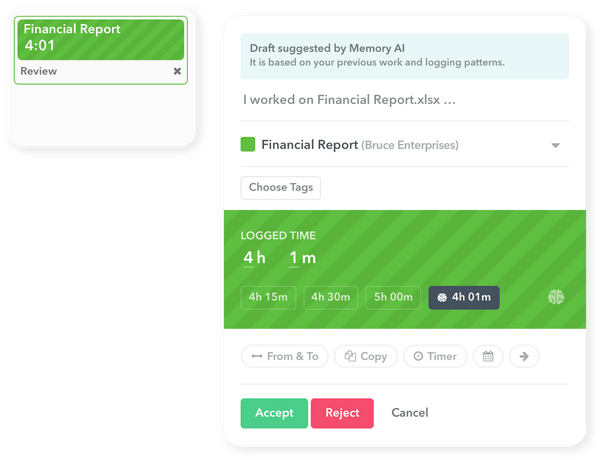 🍰 It’s that simple! In case you have any specific questions related to any of the above, don’t hesitate to nerd out with us — just send your message to support@timelyapp.com.

⚠️ ML Answers (not that you needed them)

Did this answer your question?